Several years ago, a close friend of mine, Ronnie, made a leap of faith. He decided to leave his position in law enforcement and go on staff with a ministry that helps train people how to share their faith. Going into full-time ministry where you have to raise your own support can be daunting, and Ronnie was also making this career transition in his early sixties. He worked to raise the money for a while and then got stuck, so he asked me for help. Ronnie ended up being the very first person to complete our online training for Taking Donors Seriously. After completing the training, Ronnie raised all of his support and even asked me and my wife to be part of his support team.

Fast-forward several years. I get a letter in the mail from the President of this ministry. He was reaching out to all of their major donors, asking them to pray for the funding of their ministry, because things had gotten really hard recently. (My wife and I had supported Ronnie for several years, so at this point we qualified as major donors.) Upon receiving the letter, I did pray, but I also called up the President and offered to have The FOCUS Group help them with fundraising. Together we helped launch a 19-million-dollar campaign that is allowing them to move beyond surviving to thriving. Through this campaign, they are exponentially growing their work of equipping people around the world to share their faith. 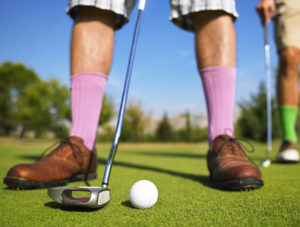 This week, Ronnie passed away after a battle with cancer. Before saying goodbye, I got to spend some time with him, and I could not help but think about the huge impact Ronnie had had on the hundreds of people that he trained to share their faith, but by saying yes, he became part of something much larger than he even knew. As his peers were headed out to play golf, he went into full-time ministry, and as a direct result, the ministry launched a campaign to enhance and grow their work. Ronnie had no idea. He simply said yes to what was in front of him.

Our lives exist within a larger framework of what God is doing. We only get to see that story unfolding every so often, but we can step forward and say, “yes” to what we are called to do. We can have faith that God will do immeasurably more than we ask or imagine. Sometimes we catch a glimpse of it, as I did with Ronnie’s story, and sometimes we will not, but I challenge you to say, “yes” this week- even if the yes seems daunting.