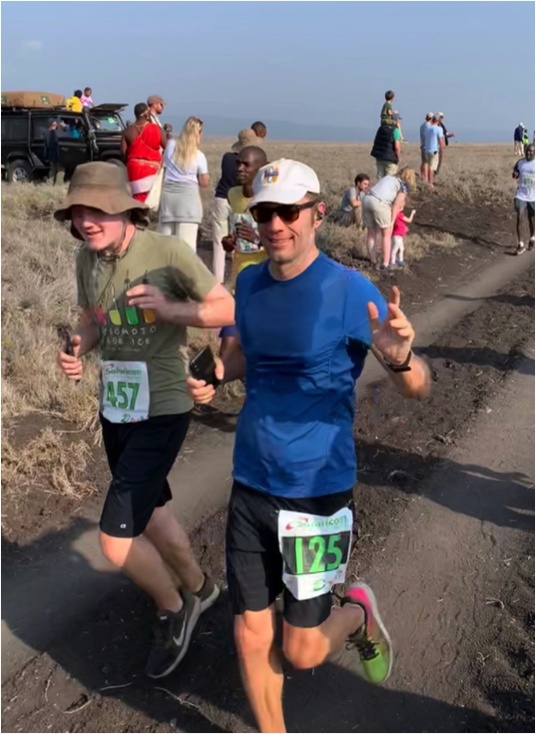 Got your attention yet? Okay, so I didn’t actually get chased by lions this summer, but I did get to run in Kenya, in the hardest marathon of my life: the Safarithon Marathon. Running 26.2 miles in the Lewa Animal Conservancy was amazing. My finishing time was much, much slower than my best, but I finished the race. I also didn’t get eaten by any large animals. (The race organizers literally stationed helicopters overhead and armed rangers along the course to be sure that the Cape buffalo and lions did not get too close to the runners.) I finished the race and had fun – especially because I got to run the first half with my 17-year-old son, Max.

While I was running the Safarithon Marathon, it occurred to me that fundraising is a lot like this particular marathon. We have to prepare, set realistic goals, and run the best race we can. At the beginning of the race, it was tempting to try to keep up with the Kenyans who were running in the race, butI needed to ignore themand run the race I had planned to run.

It is the same with fundraising. Remember: “Proper Planning Maximizes Results and Minimizes Costs.” We must focus on our goals and avoid comparing ourselves.

Last week I attended a planning meeting for a ministry that had recently been given access to nearly a thousand names of people who might be good prospects for them. What do you do with that? The first idea that surfaced was to send all of those people an email asking them to give. This approach seemed like it would be easy, quick, and cheap.

Often the person who suggests a mass email or letter says something like, “We’ll just see what happens.” Well, we know what happens. In response to a mass email or letter, the generous people will give small amounts, and the less interested will not give at all. The result will be horrible – like me trying to keep up with the Kenyan runners at the start of a marathon.

A better way to respond to this situation is to think through the list of names one by one, creating a plan that maximizes results. The plan will likely involve dividing the names into different strategies based on how well you know the people on the list.

The Safarithon Marathon is actually a fundraiser for a UK-based charity called Tusk. Tusk raises money not only for animal conservation but also for humanitarian projects in Africa. In exchange for running the race, I was required to raise $5000 (USD). How did I do it? I applied the principle of “Proper Planning Maximizes Results and Minimizes Cost.” I could have posted a note on Facebook and asked people to give me money. Doesn’t it seem like the most efficient way to get the word out? But it is not very effective.

Instead, I thought through my list of 500+ friends on Facebook and sent a personal email to 15 of those people, asking them individually if they would be willing to support me. Of the 15 people I asked, 16 supported me (one person didn’t respond, and one person asked two of their friends to join them in supporting me).

The next time you are planning out your fundraising efforts, slow down. Resist the temptation to do what others are doing, especially if it looks like a quick and easy solution. Make a plan.